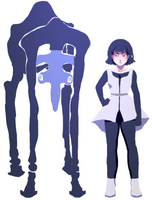 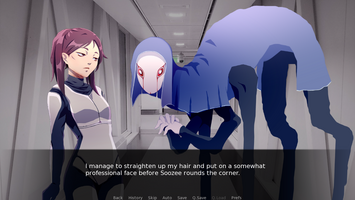 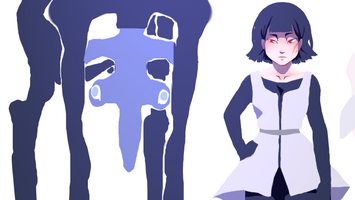 I wasn't  planning on continuing the story I started in The Sixth Prison so soon. Then the Shoot For The Stars jam came along - its timing scared me but the theme was just perfect. Lavender Link had to happen.

Attached to this log is some concept art I did for Soozee and Rika many moons ago, before I overhauled their designs for LL. Soozee's weird hammerhead shark head is still kind of endearing to me, but it was extremely difficult to draw a serious illustration with that design. I started drawing and I kept having to pause and laugh until I decided I had to redesign her. I'm pretty happy with her new design even though it was made in a hurry. Sad I didn't have time to make cute alternate poses - Soozee is supposed to be rather animated.

Rika was originally going to be a badass (space) military woman of some sort, or possibly a former one, with battle scars and maybe a cybernetic eye. Instead, she is now a janitor with a useless engineering degree and even more scars than her military prototype. Sorry for the downgrade, Rika. Even on a meta level she keeps getting the short end of the stick.

As for the story... A lot of it ended up getting cut during the last hours of the jam. I believe I deleted about a third of the script. Most of the cut content focused on character backgrounds and relationships, so it's a bit frustrating for me to read LL now and only see a tiny glimpse of the characters. I know there's so much more! Where's all the info! Oh, well. It's probably not a big deal from the reader's perspective.

Also, there's always the next game. Perhaps I'll find a way to include some of the cut content?

But first I do intend to relax for a bit. The last couple days of the jam were  super tough, mostly because I'd spent half the jam pondering whether I was going to join at all. Regardless, I'm quite happy with LL! I'm still relatively new to visual novel development, and it's such a thrill to finish a project and post it online and watch as people react to it.  I hope the thrill never goes away. A huge thank you to everyone who plays or even has a passing interest in my games!

A bitter janitor's search for redemption among stars.